Last weekend, the cold really started to set in. We braced ourselves, because winter was coming (lame Game of Thrones pun alert!), with cloudy grey skies, a soft drizzle, and the ever-present icy cold wind - the kind that makes its way through all of your layers of clothes. What a dilemma, because there was a big “loppemarked” (flea market) on Ravnsborggade, which lies in central Nørrebro, just north of the lakes. It is home to local brewery Nørrebros Bryghus as well as a long list of antique and vintage stores, which were all going to be open on said Sunday last week, and I had my mind set on stumbling across some great treasures there. So we would just have to brace the weather!

In order to get the boyfriend to come with me, I had to get a bit inventive, because he’s not a fan of shopping, “old crap stores” or cold weather (seems like he didn’t get the memo that he’s Danish!). So I suggested to have a nice breakfast before, with pancakes and bacon - not surprisingly, that totally worked! I had been wanting to try out O’s American Breakfast & Barbecue, and since it’s about a 10 minute walk from Ravnsborggade, that worked out perfectly. I called and managed to book a table, and off we went. I had passed by the place many times, but I was quite surprised at how small it actually is inside! One small room, a counter, and an open kitchen, yet somehow they have seats for around 20-25 people in there. That naturally means you sit a bit squeezed and close to other people, but hey - who cares? a) It’s cozy, and b) it’s American! I only wish their furniture was a bit more “diner style” (booths would be awesome!) to carry the ambiance. We ordered coffee, juice and a milkshake (leave it to my boyfriend to order a gigantic vanilla milkshake for breakfast!), and those were all reaaaally delicious. O’s offers free refills for brewed coffee, but I’m more of a cappuccino type, so I went with that. Again, I would like to stress that I am not American and therefore do not have any authority over the subject, but in my opinion, THIS is what pancakes should be like! They are gigantic, thick, and fluffy, begging to be soaked in syrup. Absolutely delicious! I will sing equal praise on the French toast, which was thin, nicely prepared (not soggy at all) and perfectly seasoned with vanilla and cinnamon. 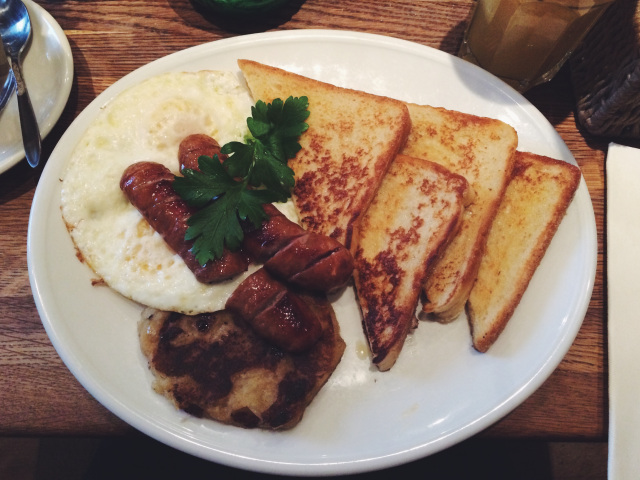 I think this is probably one of the very, very few (if not the only) places in Copenhagen where you can get hash browns. Yummy! I’m a fan! The sausage was like I know it from the States, too, so not the kind they usually serve for “continental breakfast” over here in Europe. Bacon and eggs were cooked to perfection as well.

I’d read some reviews on Yelp before that were not happy with the service, but I absolutely can’t understand that. When we were there, the staff was very friendly, sweet and attentive, our beverages and food came super fast and even though we both ordered sides and customizations, nothing got mixed up.

This charming little place has definitely made its way into my “favorite breakfast spots” list, and I already can’t wait to go back and eat more pancakes!

Favourite places, new discoveries and all that delights me about life in Copenhagen

Cakes and kitchen creations from a home in Copenhagen