I am not a total newbie here in Denmark, but I’m by no means a veteran, either. I first moved here almost two years ago, but the first year and a half, I had a job that required me to travel during the week, so I was more of a weekend-tourist than a real Copenhagener. Here are a couple of things I learned over time and that might come in handy to someone new to Denmark!

I was always astonished why people were so super friendly to me, especially after I had paid in a restaurant. Until I was told that tipping is not required in Denmark - a service charge is already included in the price. However, it’s of course always nice to show that you appreciated good service, but be aware that you don’t have to tip 20% or more, as for example in the USA.

You can shop on Sundays

As a German, this was completely unthinkable for me - I’m used to planning all of my shopping needs in advance, since even supermarkets close around 6pm on Saturdays and don’t open again until Monday. How happy was I to learn that in Denmark, this is not the case! Pretty much everything is open on Sunday. Awesome! 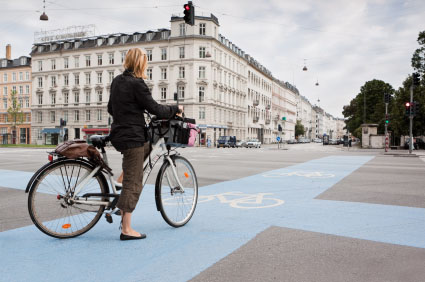 Unless you have lived under a rock until now, you will be aware about the bike culture in Denmark and Copenhagen in particular. But be aware if you are getting from A to B using any other method of transportations, because cyclists tend to believe that they are always right and they always have the right of way. Cars have to break for them, and if you’re on foot, chances are that you’ve had to jump out of a bike’s way more than once. The best ones are equipped with annoying little bells and will ring aggressively if they think you’re in their way. In the winter, bikeways are cleared of snow first thing in the morning, whereas normal sidewalks remain untouched.

In Denmark, left is right

… in politics, that is. One of the biggest parties is called “Venstre” (i.e. “the Left”), even though they are center-right. Apparently this has historic reasons, as the party was founded to oppose the party “Højre” (“the Right”), which was supporting the interests of aristocracy. Still, slightly confusing when you hear it for the first time!

Personally, this was my biggest issue when I came here! Classic, old-school Copenhagen city apartments, as beautiful as they otherwise are, have tiny, tiny bathrooms. I have been in apartments that had no shower (or bathtub) - the bathroom was literally a tiny room with a toilet and a small sink! Others, like the one in the picture, have been renovated and now have a shower head up on the wall, but you have to stand right next to the toilet - no shower curtain or anything, the bathroom is completely flooded every time you take a shower. Even in new apartment buildings, such as the one I live in, the bathroom is very small (though it has a real shower with curtain, you can actually turn around in it, and it has a washing machine). Out of all the apartments and houses in the wider Copenhagen area that I have seen, only one (!) had a bathtub.

What do you wish you knew when you moved here (or before)?

This post first appeared on my blog on Denmark.dk - the official website of Denmark. Come visit here!