Now, this is a slightly unusual post, as I normally don’t comment on political discussion on the blog. But this topic is close to my heart, and as a foreigner in Denmark, I am personally affected, so I’m making an exception. If you’re interested, keep reading!

Immigration and integration of foreigners in Denmark is always a prominent topic of public debate, or at least that’s what it seems like to me. With immigration to Denmark reaching new record highs, this is hardly surprising. And while I personally have never experienced any sort of discrimination, hostility or different treatment (at least not openly), there seems to be a general reservation towards foreigners among many Danes. For example, in a recent study, about half of the respondents thought that Danish companies had a moral responsibility to hire Danes ahead of foreigners. Some public figures, such as right-wing nut case Pia Kjærsgaard from Dansk Folkeparti, regularly promote an anti-immigrant platform, for example by accusing especially non-Western foreigners of not being able or willing to integrate. But even politicians from more moderate parties are making controversial statements regarding immigration, for example Inger Støjberg, a spokesperson for conservative-liberal Venstre, who recently demanded stricter rules for immigrants from non-Western countries, as they allegedly create more problems in Denmark. 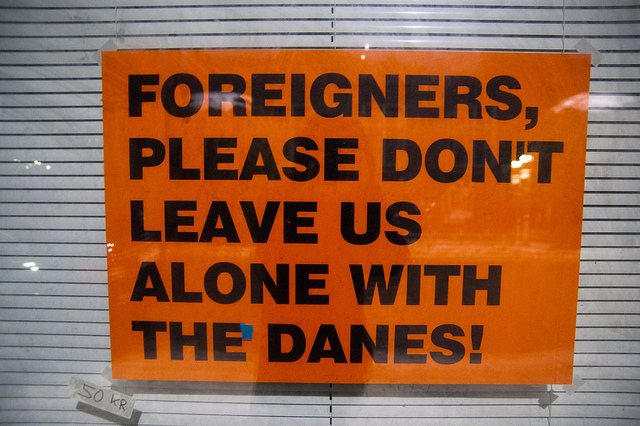 This debate was fuelled again when Venstre introduced their new immigration program at the end of July. At the core of Venstre’s proposal is the assumption that immigrants from some countries integrate better than those from other countries, and therefore, different requirements should be made for immigration. The idea behind this is that, ideally, you only want to accept people into the country that are able and willing to meaningfully contribute to society, and you don’t want “moochers” that just come for the social benefits. So far, I can at least follow the logic (note that the proposal focuses on immigration, which is not to be confused with asylum). But Venstre’s suggested solution is where things go wrong in my opinion (and experts have since stated that it might even be against international conventions). As far as I understand, these are the key points:

Now, this excludes EU countries, of course, since Denmark as an member state is bound to the EU rules of free movement. But even as a not directly affected foreigner from an EU country, I don’t agree with the proposal. Here’s what I think is wrong with it:

Now, in light of the ever-increasing stream of immigrants coming to Denmark, I see the necessity in dealing with the issue. I personally don’t have a great solution, I just don’t think Venstre’s proposal is the right approach either.