After my little rant recently about the weather here in Copenhagen, I thought I’d share a positive experience for a change - after all, I do like the city (even though I’m still not over this horrible cold, windy weather.. but I’m drifting off) and I like food and so what better to do on a dreary Satuday than to go for a nice lunch? We had a “Smartbox” lying around for a lunch anyway, so we decided to go somewhere we hadn’t been before. It was quite a discussion, but in the end I convinced the viking boyfriend to pick a place that did NOT exclusively offer burgers!

And so we ended up picking café 8Tallet (see here or here), which lies on the remote corner of Ørestad, the newly built part of the city out towards the airport, but looked to have a nice location looking out on the water. It was quite a journey to get there, even though we don’t live too far, because the walk from the nearest metro station (Vestamager) is still further than we had expected, and weather conditions were unfavorable, to say the least… when we finally walked through the door we were completely wet and frozen to the bone! Time for a nice lunch!! 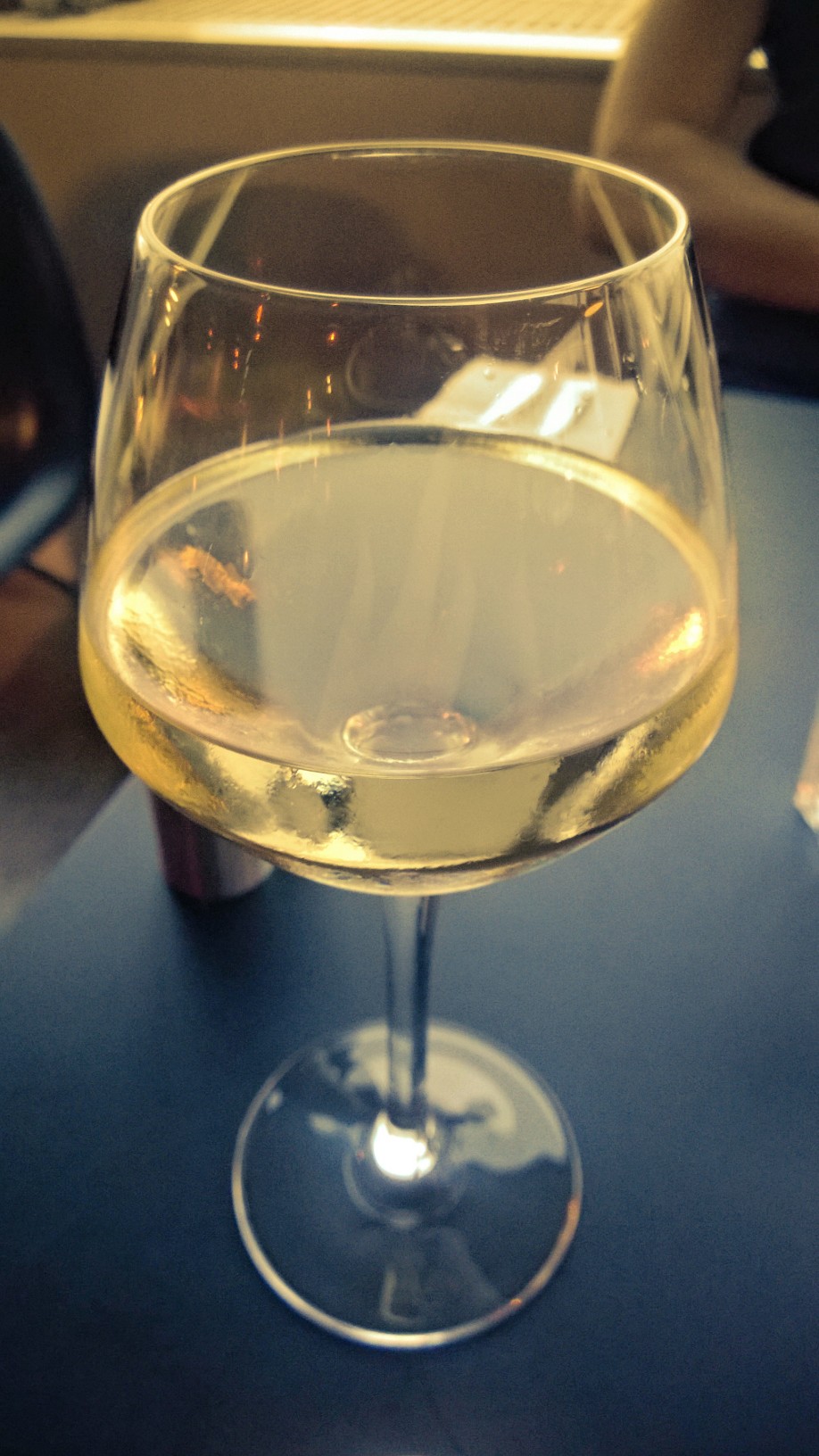 Since we had the Smartbox we wanted to use, we had a limited selection (Caesar’s Salad, Club Sandwich, a smoked salmon sandwich and a barbecue burger), but other people were ordering plates of smørrebrød and mixed Bornholm specialties that looked really appetizing as well.

I chose the Caesar’s salad and a glass of white wine, while the viking went for the Club Sandwich (even though there was a burger option!). 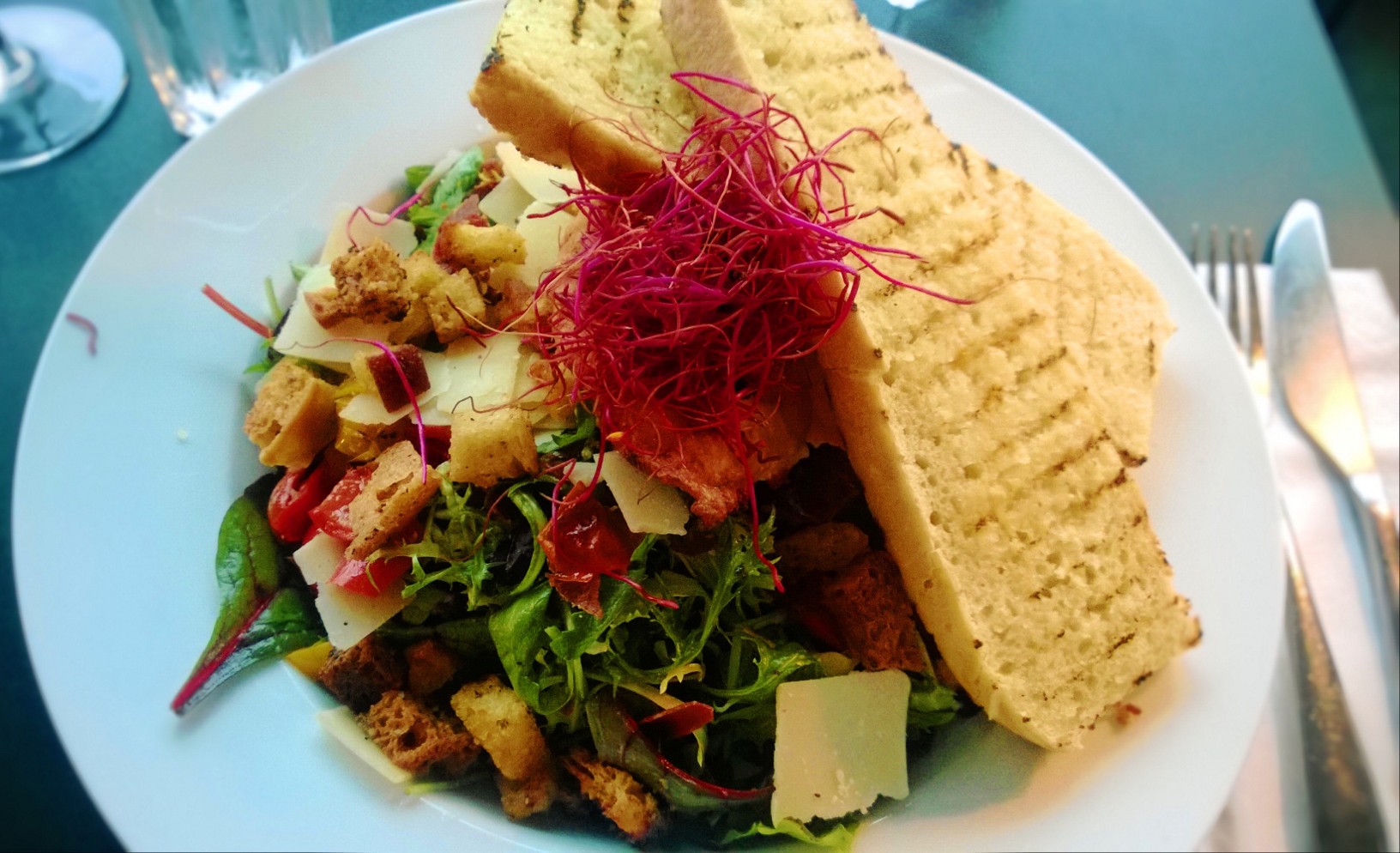 I’ve had many a Caesar’s Salad in my day, and I normally consider it a safe choice, but unfortunately, I was not conviced of this version. It contained roasted peppers that tasted quite nice on their own, but didn’t really fit the rest of the dish. There were two large chunks of chicken on top, and the meat was a little chewy, as if it had originally been cold and then just heated up again (my boyfriend’s sandwich had very similar-looking chicken, so maybe it was the same batch?). The croutons were great and there was a good amount of yummy parmesan and some crispy serrano as well, which fit quite nice. After I had eaten about half the salad, I found a huge blob of dressing that I hadn’t seen under the chicken, a bit too thick and mayonnaise-ish for me. All in all, I wouldn’t get that salad there again. The presentation (see picture above) was beautiful, though! 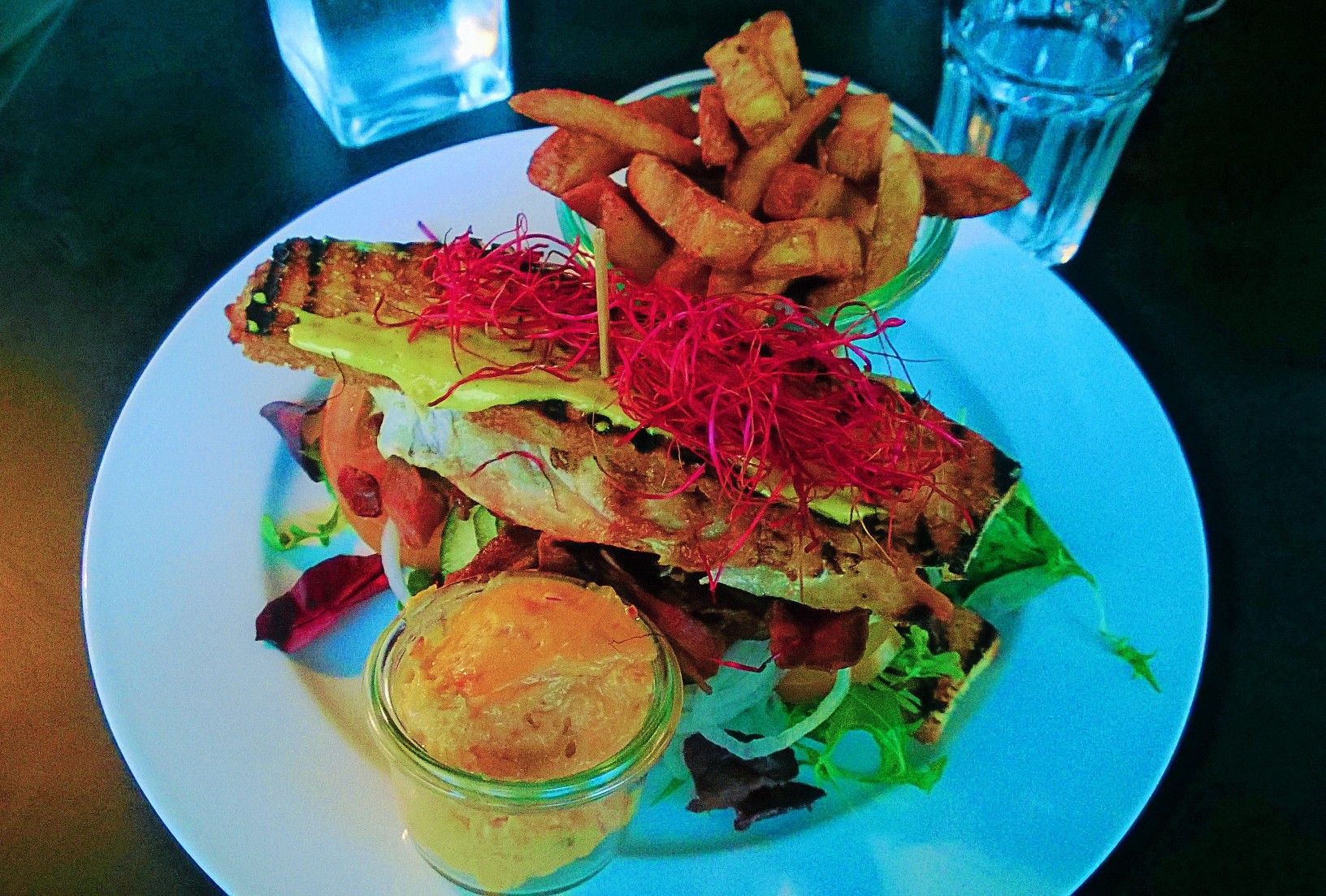 Above is the club sandwich, which was also presented beautifully, and came with homemade fries and a sort of chili mayo dip on the side. My boyfriend was happy with his choice, and the only thing I would criticize is that the bite I got was a bit heavy on the chicken side. But the bread and sauces were really nice, and again they used crispy serrano (is this becoming a sort of fancy bacon now?). The fries were really nice and crispy (I stole quite a few) and the mayo dip was delicious! 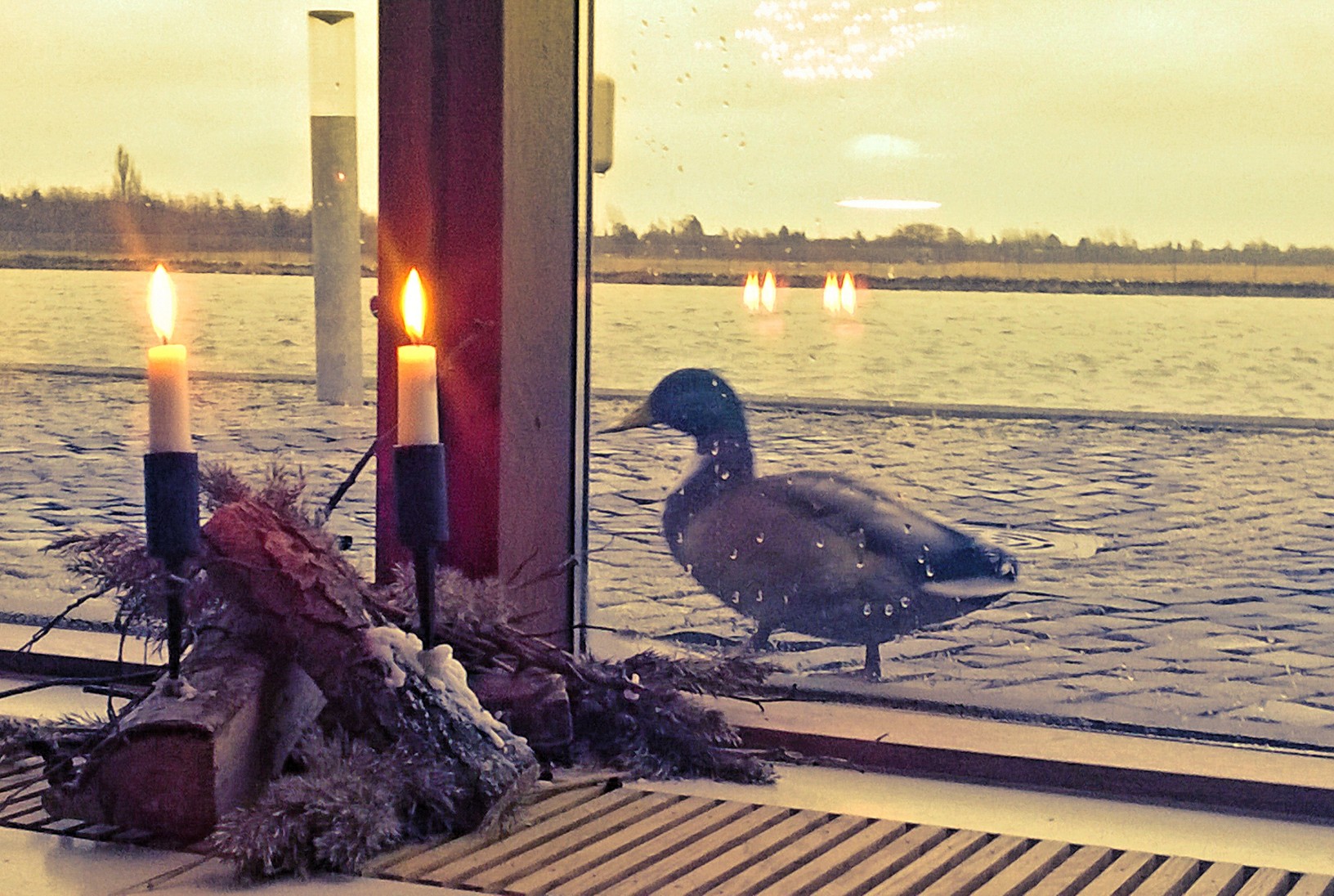 Our new friend, the duck

All in all, it was a really nice and cozy atmosphere. Café 8Tallet managed to strike a good balance between modern interiors and a certain coziness and warmth that makes you want to stay there and have another cup of coffee on a cold and windy Saturday in January! We even made a new friend: the cute little duck must have been freezing, because he kept waddling along the windowfront, and at some point one of the waitresses went out and gave him a few bread crumbs. Adorable.

Maybe a word on my choice of drinks: I decided to have a glass of white wine with lunch (pictured above), and found it very pleasant. Fruity, but still fresh - nothing too special, but good to go along with a light lunch. 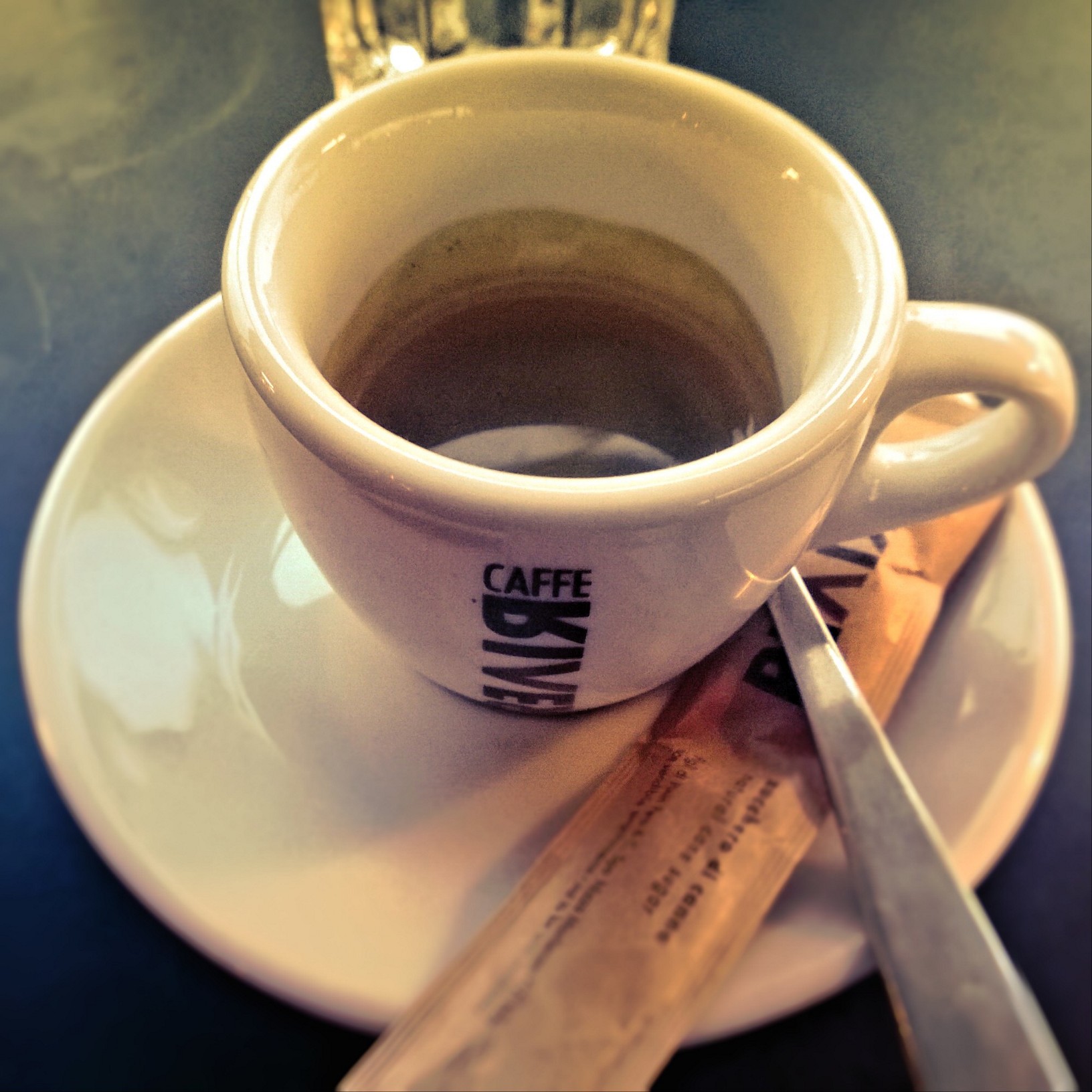 We finished off with a nice espresso, bracing ourselves and headed back out intothe Copenhagen January cold, hoping we’d make it all the way back home without losing a toe or two…

In summary, I really liked the location and atmosphere of Café 8Tallet, and even though I was not blown away by my own choice of food, I would definitely go back there (maybe in spring or summer, when it’s possible to go outside), but I’d try the smørrebrød or brunch.